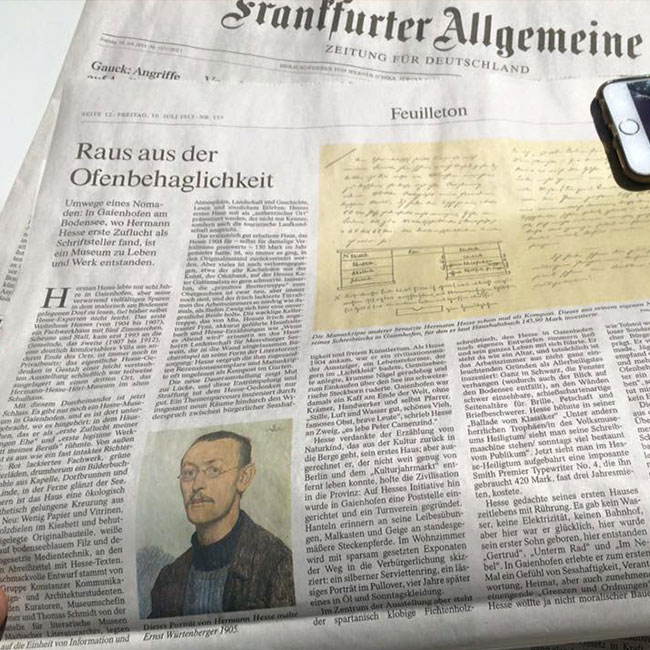 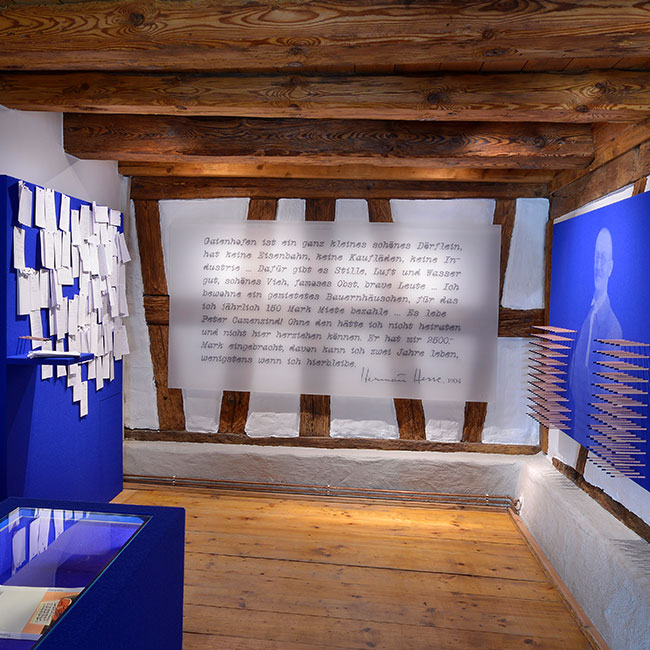 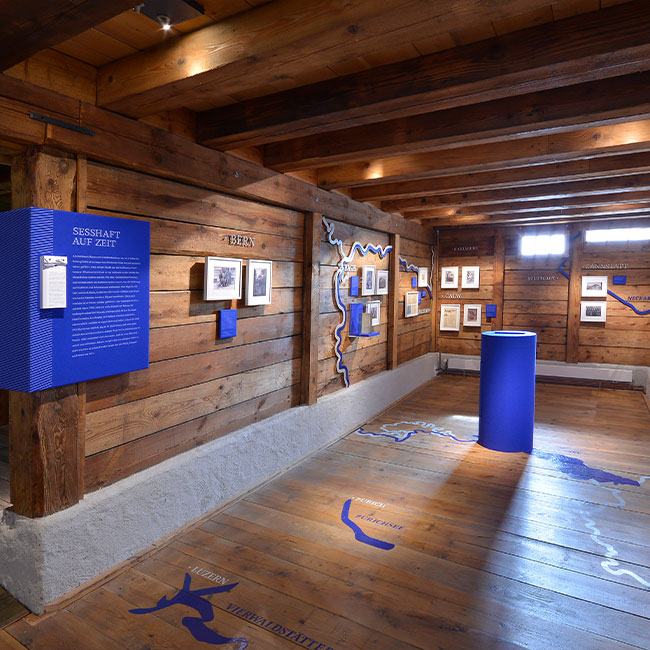 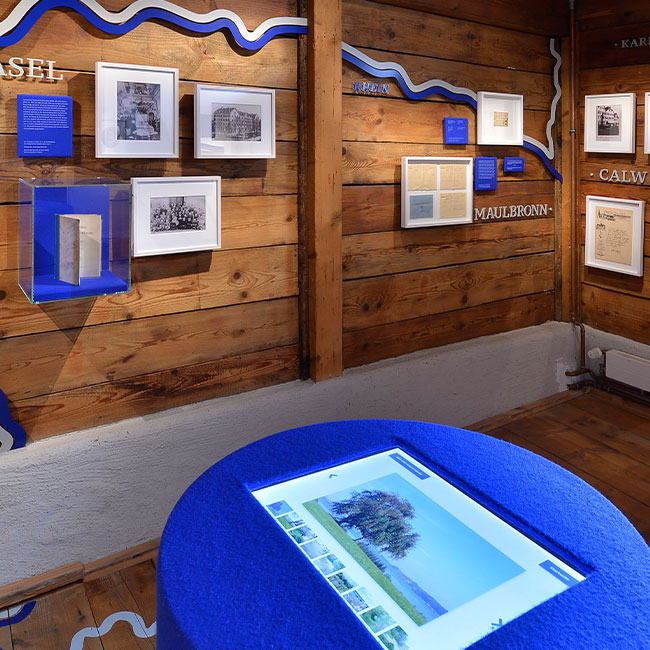 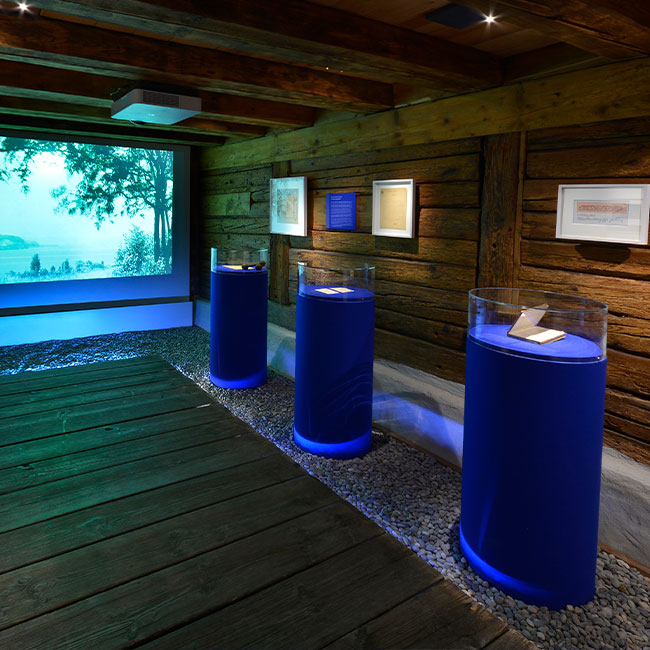 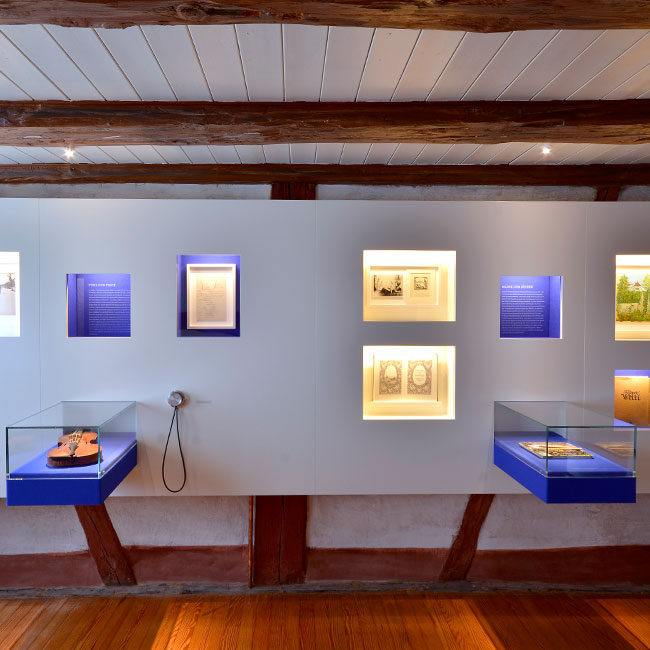 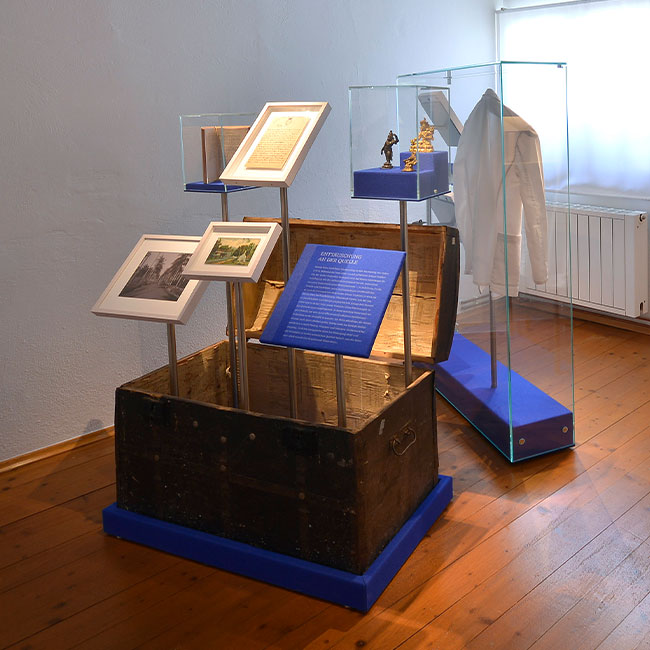 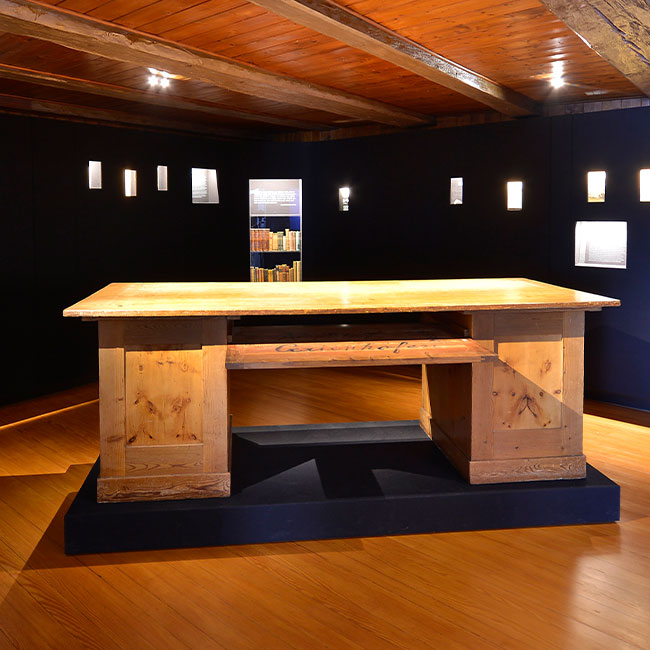 In October 2013, a cooperation between the municipality of Gaienhofen and the Konstanz University of Applied Sciences (HTWG) began to redesign the exhibition about Hesse's time in Gaienhofen. Under the direction of professors Eberhard Schlag (architecture) and Brian Switzer (communication design), students from these disciplines conceived four exhibition designs as part of a master's project. The design of the competition winner was implemented in 2014 following a decision by the municipal council. A fund by the Arbeitsstelle für Literarische Museen (Alim) Baden-Württemberg enabled starting the realization in July. The design and exhibition architecture were carried out by students of communication design (Elisa Lorio, Sandrine Mause, Alfonso Patermo) and architecture (Haydar Dalci, Jürgen Oswald) at the HTWG Konstanz. The exhibition was curated by Ute Hübner (Hesse Museum Gaienhofen) and Thomas Schmidt (Arbeitsstelle für Literarische Museen, Archive und Gedenkstätten in Baden-Württemberg). Overall, the winning design shows a strong focus on Hesse's life circumstances in the initial Gaienhofen years. It brings elements together at the historical site, with design focal points - especially with regard to the poet's former study - in a modern, innovative aesthetic and accompanied by restrained media.

What can the visitor expect?

As a prelude, the new exhibition offers a look at the young author, Hesse, who led an unstable life in various places before moving to Gaienhofen. Thus, in the first room his life journey leading to the Lake of Constance is geographically located. This also explains the exhibition title: "Gaienhofener Umwege. Hermann Hesse and his first house". This is followed by another room that illustrates the momentous decision for Hesse, but also for his wife Maria, to move to the Höri, which was still very remote at the time for a new phase in their lives. The subsequent former living and working spaces of the poet become in the exhibition concept a kind of stage on which Hesse's inner and outer conflicts are staged. On the upper floor, the focus is set on the writer with a particular emphasis on the study, which moves into the center of the exhibition as a black box together with the poet's desk, which he had specially made for this room and which was returned to the Dichterhaus in 1995 on permanent loan from the Swiss Literary Archives. In the newly designed rooms, the visitor encounters a contemporary literary exhibition, which presents these thematic focal points by the means selected.

See it live at: page-online.de